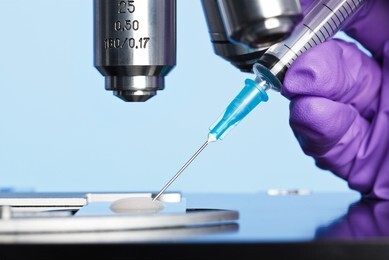 The true litmus test for male fertility remains the ability to cause pregnancy in vivo.

Seminal analysis needs to be complemented with sperm functional assay, which indirectly measures the ability of one spermatozoon to deliver the correct complement of chromosomes to an ovum.

SA is an imperfect tool but remains the cornerstone of the investigations of male infertility.

If sperm abnormalities are observed in the ‘basic’ SA or if the couple is diagnosed as ‘unexplained’ infertility, the workup should proceed to an analysis of Sperm Function Tests ( 2nd tier-level).

‘Strict morphology’ is a useful test to perform with couples that have unexplained infertility even if semen analysis and no ‘strict’ morphology are otherwise normal.

The Strict morphology takes a critical look at many individual sperms according to a very strict set of criteria. Even a minor defect in any category rates the sperm as abnormal therefore relatively few sperms are rated as ‘normal’ or perfect (near perfect) during Strict morphology test as compared to ‘estimated crude morphology’ done during a regular semen analysis (WHO criteria).

Hence the Strict morphology score is a result that indicates and predicts sperm’s potential for fertilization.

When strict morphology is 4% or less, eggs may have a better chance of fertilization with the use of ICSI.

This test can assess the cervical environment as a probable cause of infertility.

The finding of immobilized sperm with a side-to-side shaking motion suggests the presence of anti-sperm antibodies either on the sperm or in the cervical mucus. An abnormal PCT result suggests but does not prove cervical factor infertility.

Sperm viability testing is used to determine if nonmotile sperm are alive or dead and is indicated when sperm motility is less than 5% - 10%.

This test differentiates necrospermia ( dead sperms) from immotile spermssecondary to structural flagellar defects such as Kartagener’s syndrome and primary cilia dyskinesia. They are useful in primary ciliary dyskinesia where ultrastructural defects in sperm flagella result in absent or extremely low motility but with high viability.

This test is also used to select sperm for intracytoplasmic sperm injection (ICSI), in surgically retrieved testicular tissue, sperms are alive but generally nonmotile, because of lack of epididymal transit.

It is a test of sperm capacitation manifested by the ability of sperm to bind to zona pellucida and to undergo ligand induced acrosome reaction. Interaction between spermatozoa and zona pellucida is a critical event leading to fertilization.

This test measures the ability of acrosome to release hydrolases with acrosin being the predominant enzyme which subsequently allows binding and peneteration of zona pellucid by the sperm cell.

AR is triggered by the sperm - zona pellucida binding and is an exocytic secretory process.

After capacitation the sperm fuses with the ovum and penetrates its membrane and undergoes sperm head decondensation.

The spermatozoa nuclear chromatin is tightly packed due to disulfide cross links between its histone units. In this test the cleavage of S-S link is introduced in vitro by reagents to induce decondensation of the nuclear chromatin.

The spermatozoa chromatin is a tightly packed structure because of disulfide cross linkages between protamines that allow compaction of nuclear head and protect the DNA fragmentation from stress and breakage.

DNA damage is multifactorial. Some of the factors associated with increased sperm DNA damage are tobacco use,chemo therapy, testicular carcinoma.

Human fertilization involves the direct interaction of the sperm and the oocyte, fusion of the cell membranes, and union of male and female gamete genomes. Although a small percentage of spermatozoa from fertile men also possess detectable levels of DNA damage, which is repaired by oocyte cytoplasm, there is evidence to show that the spermatozoa of infertile men possess substantially more DNA damage and that this damage may adversely affect reproductive outcomes.

DNA fragmentation defects can help couples decide on what fertility modality and possible lifestyle modifications they can employ that may increase their chances of conception. ICSI is advised when DFI is above cut off levels. There is higher rate of DNA damage in ejaculated or epididymal sperm than intratesticular spermatozoa, hence use of intratesticular from high DFI men is recommended for ICSI.There is evidence to suggest that sperm DNA damage is associated with poor pregnancy outcome after standard IVF

ROS also referred to as free radicals, are formed as a byproduct of oxygen metabolism.

Small amounts of ROS may be necessary for the initiation of critical sperm functions, including capacitation and the AR. On the other hand, a high ROS level produces a state known as oxidative stress that can lead to biochemical or physiologic abnormalities with subsequent cellular dysfunction or cell death. Significant levels of ROS can be detected in the semen of 25% of infertile men, whereas fertile men do not have a detectable level of semen ROS.

Identifying oxidative stress as an underlying cause of sperm dysfunction has the advantage that it suggests possible therapies. Administration of antioxidants has been attempted in several trials with mixed results. But at this point there are no established semen ROS cutoff values that can be used to predict reproductive outcomes

The presence of sperm antibodies reduces male fertility significantly, but does not usually prevent conception altogether. Rather, the effects are graduated; i.e., the larger the immunologic response (concentration of antibodies), the less likely it is that a pregnancy will occur. When the blood level rises above 40%, natural conception is highly unlikely to occur.

Under normal conditions, direct contact between the man’s blood and sperm is prevented by a cellular structure in the testes called the blood/testis barrier. This barrier is formed by so-called, Sertoli cells, which abut very closely against each other, forming tight junctions that separate the developing sperm cells from the blood and prevent immunologic stimulation. However, the blood/ testis barrier can be broken by physical or chemical injury or by infection eg testicular torsion, vasectomy,testicular trauma.. When this barrier is breached, sperm antigens escape from their immunologically protected environment and come in direct contact with blood elements that launch an immunologic attack.

Some antibodies cause reactions between the sperm membrane and the cervical mucus preventing the sperm from swimming through the cervix (i.e.,immobilizing antibodies).

Antibodies can also block the sperm’s ability to bind to the zona pellucida of the egg, a prerequisite for fertilization (i.e., blocking antibodies).

Finally, there is recent evidence that the fertilized egg shares some of the same antigens that are found on the sperm. It is possible that sperm antibodies present in the mother can react with the early embryo, resulting in its destruction by phagocytic cells (ie; phagocytic antibodies).

Studies have shown that pregnancy is highly unlikely following natural intercourse or intrauterine insemination when either the woman or the man harbors significant antisperm antibodies.In Vitro Fertilization (IVF) with Intracytoplasmic Sperm Injection (ICSI) is the best option for conception in the presence of significant antisperm antibodies. Here, each egg is injected with a single sperm, so whether or not there are antibodies attached to the outer surface of the sperm becomes irrelevant.. In fact, pregnancy and birth rates are the same as in cases where IVF is performed for reasons other than male factor infertility. IVF/ICSI success rates are also unaffected by the concentration of antisperm antibodies.

*Intrauterine insemination (IUI – sometimes referred to as artificial insemination) of processed sperm is contraindicated in cases of moderate or severe male immunologic infertility because it does not improve pregnancy outcome.

There are two methods for detecting antibody bound to the surface of motile sperm: